Resilience: How to thrive at work in the 21st Century

The latest event hosted by the Yorkshire PM Forum committee was held at Lupton Fawcett LLP on 11th May 2018.  The topic was Resilience. How to thrive in the 21st century presented by Nick Girling from Nick Girling Associates – Training, Coaching and Business Consulting.

Nick opened by saying in profession services the stakes are high and resilience is the way to survive and thrive as long hours are expected.  Eating your lunch at your desk and answering emails before you go to bed are not healthy.

So what is resilience?  Nick gave us the definition from the Oxford Dictionary which is ‘the capacity to recover quickly from difficulties’.  This word is often over used and misunderstood in business as a term for strength, not vulnerability.  Research tells us that resilient people come out on top, they are healthier and live longer, are more successful at school and in the work place.  They are also happier and less prone to depression.

Thriving at Work – Farmer and Stephenson 2017 found that the cost to the UK Economy of mental health issues at work is estimated to be £99billion / annum.

The first of Nick’s points was around time and task management and how to prioritise.  We all know s there is no more time available. He asked he audiencel to draw a clock face and fill it with squares (squares = tasks)  – when all the squares fit into the clock face we’re happy but when there are squares floating outside the clock face this means we have more work than time allowed.  Nick advised how to deal with a floating square:-

Most people tend to do it now to get it off their desk. Using Mintzberg’s Table we can see where other people’s urgent tasks end up. 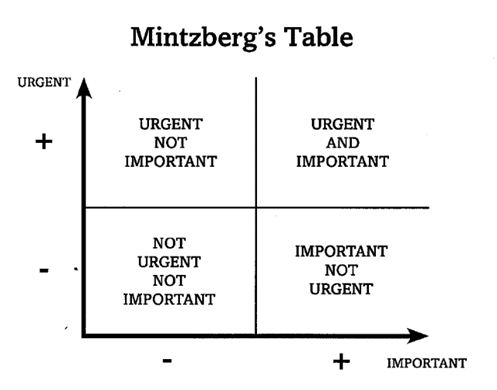 When prioritising Nick advised we must ask ourselves:-

Say no effectively is difficult and Nick spends a lot of time coaching people in this skill.  Saying ‘No’ effectively means saying ‘Yes’ to be being more effective.

When faced with someone else’s urgent, rather than getting into cognitive distortion or the thinking trap, use flexible thinking and work out how to deal with the task.  Visualisation, which is Nick’s second point for resilience, can help the outcome. Nick advises we should visualise the steps and visualise the feeling of the outcome.

Nick’s final point on resilience is around your network.  Your circle of resistance includes people you can be vulnerable with but there are more people outside the circle.  Nick asked the audience to think about these people and decide whether they should be spending more time with them – challenge yourself to spend time with other people.

Nick finished with his Do’s and Don’ts:-

-       Do practice mindfulness to finish work.