A purpose is for life, not just for a crisis

In early 2021, PM Forum members were surveyed on where their firms sat in terms of CSR, responsibility and purpose. Helen Foord analyses the findings of the first Professional Services Purpose Survey. 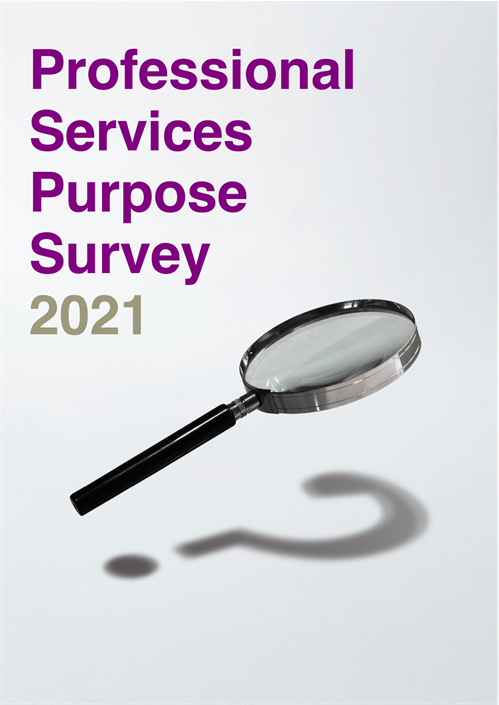 In conducting the first Professional Services Purpose Survey we wanted to understand where the professions sit in terms of CSR, responsibility and purpose – or ESG, as it is so often called. Has there been an explosion in terms of interest in ethical practices within the professions or is the sector lagging behind the wider marketplace and client demand? Is there an understanding that CSR and responsibility differ from true purpose? Furthermore, has there been a developing understanding that ethical practices – far from being a financial expense or drain – can be used to underpin growth and strategic success?

In this first report we sought to draw a line in the sand, from which to grow and measure progress.

Part 1: Strategy, planning and reporting
Budget: Although 80% of respondents said there was an agreed budget for CSR, responsibility and/or purpose, only 35% said activities were entirely planned in advance. 61% said they were ‘somewhat’ planned in advance.

Activity: When we looked at specific activity, charitable donation – perhaps unsurprisingly – was the most popular with 77% of respondents partaking in this. Interestingly only 70% of law firms identified this activity against 90% of accountants. Pro bono work was next with 75% of respondents identifying this. In this situation the opposite balance can be seen to charitable donation, with only 30% of accountants versus 87% of law firms involved in this activity. It was also interesting to note that firms, irrespective of sector, are far more involved in traditional CSR activities than the more involved responsibility and purpose activities, such as carbon offsetting (51%), creation of dedicated foundations (51%) and education support (21%).

Membership: Although 23% have signed up to the UN Global Compact, 22% to Investors in People, Race at Work Charter or Legal Sustainability Alliance, 18% to The Chancery Lane Project or the UN Sustainable Development Goals and just 2% holding B Corp Certification or having signed up to Climate Perks, it was most interesting to see that the highest category in this area was ‘Other’. Generally more accountancy firms are signed up to ‘something’ (60%) than law firms (40%).

Documentation: 8% didn’t have a responsibility strategy or policy, and a further 8% didn’t know if they did (which represented 20% of accountants that responded). Of those that did, environmental measures were top (77%), followed by diversity (75%) and social impact (67%). Fair dealing (33%) and taxes/financial practices (31%) were the least frequently included. Only 45% of those that said they had a strategy or policy said that it was published in the public domain.

Reporting: Although environmental performance (51%) was the most reported on topic, only 12% reported on this against goals. This broke down to 10% of accountants and just 3% of law firms. GPG reporting was also included in 51% of published reports (despite being a legal requirement for most) yet only 30% of accountants and 47% of law firms said that they went ‘above and beyond’ the legal requirements by including equity partners in the reporting.

Part 2: People and priorities
Importance: 71% had a formal E&D programme with 47% having someone in post, responsible for its delivery. Only 10% of these people were at Board level, suggesting it is still viewed as tactical, rather than strategic. 14% had no programme or anyone responsible for it (even in an HR or marketing role) and 4% didn’t know. It was particularly interesting that 30% of accountants had ‘none of the above’ but only 6% of law firms ticked this box.

Part 3: Performance
CSR, responsibility or purpose? We asked respondents to consider where their firm is on the journey from CSR to responsibility and, ultimately, purpose. The largest group said they were working on ‘responsibility’ but have a lot of work yet to do (31%). 24% said they consider ‘purpose’ to be a fundamental part of their organisational identity, with a direct link to strategic planning and growth. 16% said they do a lot of ‘CSR’.

What we can learn from this first Professional Services Purpose Survey
Performance versus priorities: There seemed, initially, to be little correlation between what was important to staff and performance, but some correlation for partners. Ethics, working practices and taxes/financial practices were most important to partners and, also, featured as the highest performing areas.

For staff, however, sustainable procurement was most important, working with suppliers second, taxes/financial practices third, ethics fourth and working practices fifth. This suggests that there is a noticeable breakdown in terms of having a clear vision that is brought into being by all and and implemented well.

Progress to purpose: This report shows that the majority of firms, although willing and working towards purpose, are in the early stages, with the majority still focusing on traditional CSR areas such as charitable donation, rather than the core responsibility and purpose activities, such as carbon offsetting, creation of dedicated foundations, education support and placing importance in procurement and worker development programmes.

To fully understand this, the question must be viewed within the context of the 71% that said they had a formal E&D programme, the 77% that had previously said they had an approved responsibility strategy or policy and the 45% that said it was published in the public domain. With such high numbers saying that there were written and even published plans and documents, but so few able to articulate whether their focus is on external, internal or combined priorities (as well as its strategic relevance) – and viewed within the context of the lack of internal agreement as to priorities – we have to ask whether the work being done is, yet, truly meaningful. We must also ask how this work can, truly, be impacting on strategic objectives.

Membership: Although almost all of those that have signed up to ‘something’ produce reporting on their activities, only 12% reported against environmental goals, for example. The findings lead us to consider two things: first, there is a sense of confusion about the best course of action when it comes to membership of these frameworks and, second, this confusion extends to understanding their strategic role and value.

Reporting: This survey highlighted a wide range of reporting techniques – perhaps unsurprisingly, given the wide range of frameworks, measures and approaches being taken. What was most clear, however, was that firms struggled to know how best to report on this activity. With a significant proportion not aligning activities with strategic planning at a firm-wide level, there was rarely any demonstration of how this activity sat alongside financial and more traditional annual reporting. Readers of this report will note how few, for example, used the Triple Bottom Line in their reporting (only 10% of accountants used it and only 3% of the legal sector).

Firms understand that they need to be looking at ESG and the majority have active programmes and budgets to support it. At an anecdotal level the majority accept its importance not only for internal practises but as a driver for business development and client care. But what they appear not to be in agreement about is what this means, precisely what’s important to their internal and external audiences, how to tackle these things and how to hold themselves accountable for progress. Although, as the case studies in the report show, there are some trailblazers in this field, in the majority of cases this confusion appears to be underpinned by a lack of understanding not of whether this can provide strategic advantage but how.

The full report, as well as case studies and further analysis, can be downloaded at: bit.ly/PSPurposeSurvey2021

Helen Foord is the first specialist in responsible strategic marketing and business development for professional services organisations. With almost 20 years’ experience of working in this sector, Helen has completed the B Leader course as well as having led ELE Global to achieving B Corp status.